As a vegan, and a breast cancer survivor, I am asked ALL the time if I avoid soy. The question is, should you avoid soy to prevent cancer or its recurrence; or does it cause cancer? 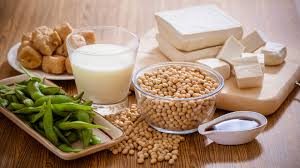 It is interesting to me that some people choose to ignore the fact that hormones are in cow’s milk (really, there is NO such thing as hormone-free milk because for a cow to be pregnant to produce milk, they have hormones!).*** See my side note below!
Instead, they focus on the idea that there might be hormones in milk substitutes, especially soy milk.

Soybeans and many other foods contain natural compounds called isoflavones. These compounds have been called PHYTOESTROGENS (meaning plant estrogens) because their chemical structure vaguely resembles sex hormones. This has led some people to suggest that soy products might cause breast cancer, or make it progress. It turns out the opposite is true because rather than causing cancer, there is research that shows it may help to prevent it. In 2008 researchers examined the relationship between soy products and breast cancer, combining the results of eight past studies in a meta-analysis. The study looked at Asians & Asian-Americans, for whom soy milk and tofu would be common foods. Results showed that women who consumed the most soy were 29% LESS likely to develop breast cancer, compared with those who avoided soy. Another meta-analysis done in 2014 combined 35 prior studies and the results showed that soy CUT breast cancer risk by 41%.

Studies have also been done on women who have already had breast cancer. Many women, including me, who have been treated for breast cancer are counseled by their well-meaning doctors to avoid soy products on the theory that “soybeans have estrogens that can make the cancer grow”. A study in 2012 of about 9500 breast cancer survivors set out to understand this question and their results showed that the women consuming the MOST soy products were about 30% LESS likely for the cancer to recur compared to women who consumed little or no soy. The studies showed that rather than ENCOURAGE cancer growth, soy milk, tofu, and other soy products may help to PREVENT cancer.

While I personally don’t think soy products are essential for a vegan diet, they can be good replacements for dairy that DOES come with serious health risks. As with anything, moderation is always key and choosing organic products, especially for soy-based foods, is imperative because soybeans are one of the most genetically modified crops out there!

To answer the original question, NO, I do NOT AVOID soy products!

**Yes, cows need to be pregnant to make milk and there is no such thing as a cow that just makes milk because it is a “dairy cow”…get the facts straight here! I’m amazed by the people who have been so brainwashed by the powerful media to think that the cows that give us cow’s milk roam happily in the open pasture with a few other cows and just produce milk for our consumption. The reality is HORRIFIC for what these “dairy cows” go through and I suggest you read one of my favorite books, The Cheese Trap (by Dr. Neal Barnard) to learn more about how you REALLY are getting cow’s milk! Which, by the way is meant to grow huge baby cows quickly………..so what exactly is this doing to human babies??? Think about it, and read some good books!