I used to love waffles – but back in the day, they probably weren’t “real” waffles. Oh don’t get me wrong, they were waffles – but you know the kind I mean…highly processed, and full of things that I surely couldn’t pronounce then or now!

I felt a bit more sophisticated however when I purchased my first waffle iron about 13 years ago – now I could make “real” waffles. You know the kind I mean – Bisquick mix with additions of water, eggs, and oil. Yes, this was back in the day when I still ate eggs. Please don’t judge 😊. Now those to me were the REAL thing. But as my cooking skills expanded, I found myself making the batter entirely from scratch and wow, what a difference that made!

Fast forward to when my lifestyle changed to follow a vegan and gluten free diet almost 7 years ago (early 2014). When I first made the switch, I was definitely cautious about trying to veganize my old-favorites – I just didn’t have the confidence in my vegan cooking skills (yet) – and quite honestly, never even attempted to make waffles. Until now.

Why now all of a sudden did I decide to make some vegan & gluten free waffles, an old favorite that I completely forget about? You see, I’m having my Dad over for a special birthday brunch and he mentioned waffles. “Oh boy” I thought…I have never made vegan/gluten free waffles, so I better figure this out ASAP – his brunch is in two weeks! So I dusted off (well, it needed more than dusting, trust me!) that old waffle iron and hit The Book…my decades old Better Crocker book of course! While pretty much nothing in that cookbook is already vegan and gluten free, I am comfortable enough to take the foundation and revamp it to meet my dietary preferences. I’ll be honest with you, sometimes that takes many tries to “nail” it, but luckily I hit the jackpot on the first try for this recipe!

To veganize and remove gluten I made some simple substitutions. Here’s a summary of those modifications:

Instead of eggs, I used Bob’s egg replacer & water. Yes, I probably could have done flax seed and water, but I opted for a little help from Bob. Maybe next time I’ll try flax seed…or how about some aquafaba (canned chick pea liquid) as that makes a delightful binder!

Next, I swapped out the dairy milk for almond milk. If I had oat milk or hemp milk in the fridge, I would have used either of those. But for this trial, it was almond milk.

Instead of white flour, I used Bob’s Red Mill Gluten Free baking flour. Yes, a healthier alternative would be to use chickpea (garbanzo bean) flour or almond or oat flour…but I chose Bob’s for my first time here. Sometimes the other flours don’t rise as well.

Betty’s recipe called for ½ cup of oil and I just wasn’t crazy about that much oil (knowing I would be soon slathering these waffles with Miyoko’s vegan butter!) so I substituted with half unsweetened applesauce and half oil. Next time, I think I’ll omit the oil entirely and use all applesauce – I’ve done that with cakes and other baked goods with fabulous results.

I’m not crazy about adding refined sugar to recipes, but I did follow the original recipe and added a tablespoon of cane sugar – just be sure it is organic and vegan because if not, regular cane sugar can have bone char in it rendering it not vegan (and gross if you ask me!) I could have subbed a tablespoon of pure maple syrup in place of the granulated cane sugar, or just left out the extra sweetener entirely. After all, I will be topping my waffle with a generous amount of pure maple syrup which will give me plenty of sweetness!

Lastly, I love the extra flavor that cinnamon and vanilla give, so I added those special ingredients. Those are optional adds and won’t affect how these delicious waffles bake so if you don’t have those ingredients, or prefer not to add, no worries.

Here is the recipe in its entirety…I hope you enjoy them as much as I did! No one will ever know they are vegan, gluten-free, and a bit healthier than the “original” recipe… 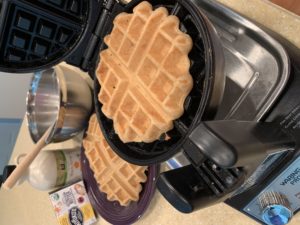 Leave some comments below for your creations! 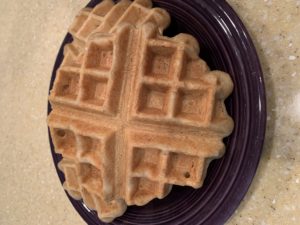